From The Culling Wiki
Jump to: navigation, search
Rock 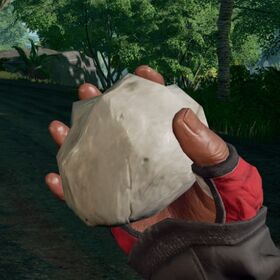 Rocks are items that spawn randomly around the map and are mainly used for crafting. Rocks can also be spawned by hitting a rocky surface multiple times. Although the rock's main purpose is to be an item for crafting, players can also wield them as weapons to damage their opponents or as a cheap object to throw at something or someone.