View source
watch 01:54
Obi-Wan Finale - The Loop
Do you like this video?
Play Sound

While at first The Culling's map might seem large, once you understand it, it is not nearly as daunting. Learning the map is an important skill to have, as it will give you an advantage over your opponent. 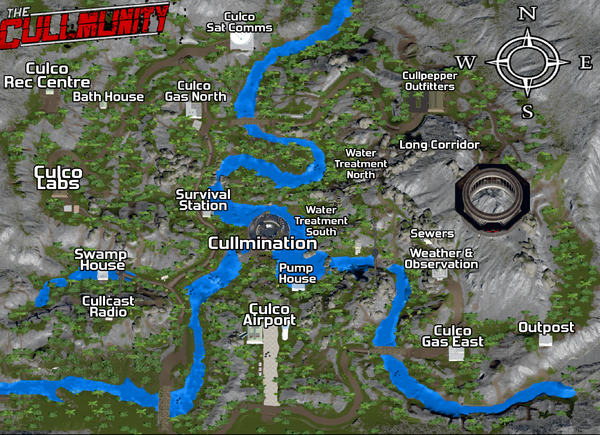 Map Objects are objects that spawn around the island which are used for a large variety of things.

Recycle Stations are blue machines at buildings that allow you to recycle Items and weapons and turn them into F.U.N.C.. The amount of F.U.N.C. you will be rewarded with depends on how good them item or weapon is. Just like the medical station, you have to look at the recycling station while using it. This along with it being very noisy for both you and other contestants makes you very vulnerable for sneak attacks.

Medical Stations are red machines at buildings that allow you to heal in exchange for F.U.N.C.. It will heal you 4 health for 1 F.U.N.C. at a rate of once per second. This makes it much faster than crafting Crafted Bandage heal, but is also much more expensive. Just like the recycle station, you have to look at the medical station while using it. This along with it being very noisy for both you and other contestants makes you very vulnerable for sneak attacks.

Airdrop Pads are pads scattered around the island where you can call in your airdrop. They have predetermined spawn locations, and each location has a chance to spawn each game. Airdrops will take 45 second to land (15 seconds with Load Dropper perk equipped), but they can be shot down early with a ranged weapon or by throwing an object at it. Contestants must also be wary of opponents when calling in their airdrop, because they are very noisy, which may attract other contestants who may want to steal it.

Trap Bridges are very dangerous bridges that hang very high up and connect two cliffs together. They are dangerous because the floors drop when they take damage, causing any contestants on them to fall from a great height, taking massive damage because of it. This allows other contestants to either knock their opponents off, or trap them in the middle which is the only solid ground on the bridge. Trap bridges however do have special airdrop pads on them as well, which will spawn contestants' airdrops to spawn directly overhead, allowing them to receive their airdrops extremely quickly. This however is a great risk, because if any opponents are nearby, they can hear the airdrop and come to trap them on the bridge.

Map Events are random events that take place twice during the course of a match. The first event takes place at the 19:15 mark, while the second event doesn't occur until 13:00. These events are designed to draw players together to encourage fights and spice up the game play. These events take a few different forms, each with their own unique announcements and themes.

You can read more about them here.

There are 19 Buildings in The Culling placed for our looting pleasure. Every building is vastly different, on both their appearances and lootable objects. Each building (besides the Mini Sewers) will have at least 1 Recycle Station and Med Station. This list will start at the most northern building, and move clockwise until all buildings have been listed.

(Note: Lockers in Culcast Sat Com have a reduced spawn rate due to the high amount of lockers)

(Note: The Sewers have multiple gates along the length of it, which can be knocked down by hitting them. These are useful when running from an opponent. They can also be very deadly when paired Gas Tanks that spawn inside of the sewers, allowing you to trap your opponent in the gas.)

(Note: Lockers in the Pump House have an increased spawn rate due to the small amount of lockers)

(Note: the airport also has 3 miniature buildings along the runway. These buildings have a 100% chance to spawn an item crate in one of them.)

(Note: Lockers in Culcast Radio have an increased spawn rate due to the small amount of lockers.)

(Note: The Mini Sewers are hidden at the base of the mountains behind Culcast Radio. It is in the mountains the the left of the cave, and once you're back there it is easy to spot.)

(Note: Culco Labs also has 2 smaller buildings right next to it)

(Note: This building is usually looted alongside Culcast Rec)

(Note: This building is usually looted alongside the Basketball Courts)